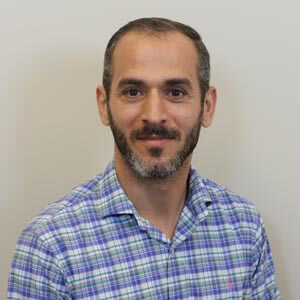 Dr. Shehada Homedan is a physician who specializes in medical and surgical care of orthopedic injuries. A native of the Kingdom of Jordan, he completed the rigorous orthopedic surgery program at the Jordan University of Science and Technology. Dr. Homedan followed that with two fellowships: in orthopedic trauma at the University of New Mexico Hospital in Albuquerque, and in orthopedic adult reconstructive and orthopedic sports medicine at the State University of New York at Buffalo in New York. Dr. Homedan became interested in orthopedics while doing his first surgical rotation. When choosing where to practice, he and his family found rural Iowa irresistible – preferring it over chaotic and crowded city life. Dr. Homedan has a wife and three children and is an avid soccer fan. When he’s not working, he enjoys playing soccer and competing in soccer matches.